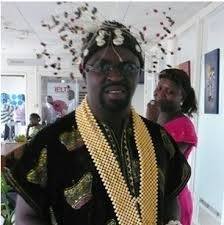 H.R.M Thomas Ayuk Fotang, popularly known Nationwide’s and beyond today as ‘’Pa Tom,’’ popped to fame from rather humble beginnings. He hails from Ewelle Village in Eyumojock Subdivision of Manyu Division in Cameroon’s South West Region.

H. R.M Thomas Ayuk Fotang was born, years ago to a polygamous home. His mother, the second of three wives was blessed with seven fruits of the womb, “Pa Tom” being the sixth. Today he is not only happily married, but heads his own family that has already been blessed with 3 gorgeous baby girls.

His passion for communication was discerned quite early on is life. Soon after graduating from high school, he was blitzed by an insistent calling to the radio where he almost immediately carved a niche for himself. The public soon discovered a budding radio presenter endowed with a “unique, stress-free and profoundly comical touch”.

Before long, the highly gifted and overwhelmingly passionate presenter wriggled upwards to affirm his place as newscaster and architect of several radio and television entertainment programs.

He is holder of a distance learning certificate in radio and television presentation. In 2002, H.M. Thomas Ayuk Fotang signed a contract with the Douala – based Sweet FM Radio as a continuity announcer. He designed and introduced the programs – “Ancient Dialogue”, Afro-Diaspo, Lyrical Boom and then Sweet Bottom Belle which is presently the oldest program on the radio. He also owns the right as the creator of the widely popular Scratch Ya Eye sit-com aired on Canal 2 International television. Apparently, the limit of this entertainment imagination end only at the level of the skies as he bubbles everyday with new and innovative ideas marketable on any radio and TV station around the word.

The self-sacrificing Ayuk Thomas Fotang first debuted in the world of humanitarian activity in 2003 when the voluntarily began doing promotion work for Spirulina Food Mocroalgae with the Royal Development Corporation. The project seeks to popularize the use of the aquatic plant specie in fighting malnutrition.

His involvement in that project was an icebreaker that would fling open several doors of opportunity for the determined up and coming radio and television presenter. Only two years later, in 2005 he was appointed head of the communication unit of the Royal Goodwill Supportive Diplomatic Mission of CISRI-ISP Cameroon. The same year on October 25, he was conferred the Royal Excellence Award.

Then a turning point in his life came in February 14th 2008 when his efforts culminated in his coronation and award of the distinguished title “NFORKANG” meaning King of the Youth. That was on February 14th 2008. He had another appointment as Director of the Royal Goodwill Supportive Diplomatic Mission of CISRI-ISP Cameroun, a UN permanent observer mission, due to his volunteerism.

Apart from his natural talent as a proven entertainer, H.M. Ayuk Thomas Fotang not only stretches the limits several times everyday to make others smile, but finds time to pursue his hobbies. They include playing golf, swimming, and tourism and above all writing listening and dancing to music.

The man, a philanthropist, Humanitarian activist is also prolific as an entertainer presenter of Top Radio and Television Programs in Cameroon.